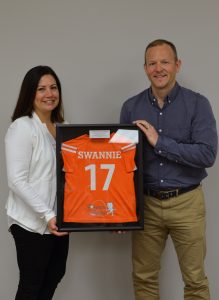 Heather and Chad Swannie have officially been awarded a Soccer Shots franchise. The Swannies purchased a new territory in California: Ventura County. We are excited to have Heather and Chad join our franchise community!

“Put simply, we were attracted to the mission of Soccer Shots and the program used to fulfill that mission. Owning a Soccer Shots franchise gives us a chance to have a life career doing something that we are passionate about.”