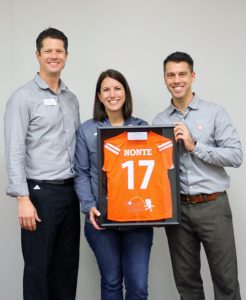 Heather Nonte has officially been awarded a Soccer Shots franchise. Heather purchased a territory that was already in existence: Southwest Chicagoland. We are excited to have Heather join our franchise community!

“I have been running Soccer Shots Southwest Chicagoland for the past year and decided to purchase it when it came up for sale. I believe in this company and I’ve met really great people in the Soccer Shots community over my past four years with Soccer Shots.

I like having the support of the franchisor. The curriculum and model provided by Soccer Shots makes running my own business more attainable than doing it all by myself. I chose a Soccer Shots franchise because of the people I’ve met at the annual Soccer Shots National Convention and the support everyone gives each other. The excitement that the owners and employees have about Soccer Shots is appealing as a prospective business owner.”