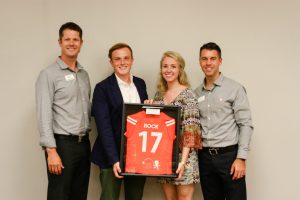 Sarah and Aaron Rock have officially been awarded a Soccer Shots franchise. The Rocks purchased a new territory in Tennessee: Memphis. We are excited to have Sarah and Aaron join our franchise community!

“I have played soccer my entire life and have been blessed enough that it carried me here to America. In America, I began coaching with Soccer Shots in Raleigh-Durham, NC and while there my wife and I saw the potential of what owning my own Soccer Shots could be like. As a coach, I loved working with children, seeing them grow, and having a great time while playing soccer. We both felt that moving to Memphis and opening our own Soccer Shots was the right path for us. We are looking forward to positively impacting Memphis through the sport and with Soccer Shots.”