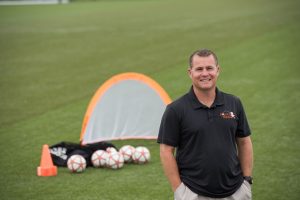 HARRISBURG, Pa. – Soccer Shots announced today that it has been ranked on Franchise Times’ Top 200+ list, the most comprehensive ranking of the 500 largest franchise systems in the United States. The distinguished list is based on Soccer Shot’s global system sales and number of locations, poising the franchise concept to be among the most reputable brands in the nation.

The acknowledgment of being named to this ranking verifies the exceptional growth the company has experienced in the past year. In 2018, the brand generated $55 million in sales and added 13 new territories. Currently, Soccer Shots has reached more than 223 locations throughout the United States and Canada.

“It’s truly an honor to be part of this list and recognized as one of the top franchise brands in the country,” said Justin Bredeman, CEO of Soccer Shots. “This milestone achievement signifies the brand’s momentum over the past year and our franchisees’ hard work to provide children across the country with the best soccer experience through top tier programming and coaching day in and day out. We can’t wait to harness this momentum for continued growth in 2020.”

Aimed at positively impacting children’s lives, Soccer Shots strives to be the best part of a child’s week through best-in-class coaching, communication and curriculum. Serving children ages two through eight, each franchise emphasizes having the best coaches in their communities, an exceptional customer experience including ongoing communication and an expert-approved curriculum that aligns with early childhood education standards. The weekly programs, customized for three different age groups, teach children soccer fundamentals and character-building skills. Soccer Shots hosts private sessions through local schools and childcare centers as well as public programs, which are typically hosted through park districts.

For entrepreneurially spirited individuals interested in owning a Soccer Shots franchise, the typical franchise fee is $34,500. Plus, Soccer Shots is a proud partner of the VetFran program. Approved candidates receive 15% off of the total franchise fee. Ideal franchisees have a strong passion for making a positive impact on children and a desire to lead their own business. Soccer experience is not necessary to join the franchise, but knowledge and dedication for the sport is preferred.

To learn more about finding a Soccer Shots session near you, visit: https://www.soccershots.org.

Based outside of Harrisburg, Pennsylvania, Soccer Shots is an international franchise program that provides children ages two through eight with a developmentally appropriate soccer and character development experience under the guidance of childhood education specialists, professional soccer players and experienced and licensed soccer coaches. The brand’s curriculum-based program is offered in more than 200 territories across nearly 40 states and Canada, serving over 440,000 children each year. Soccer Shots was founded by two professional soccer players who identified a need for quality and engaging soccer programs for children under age eight. To find a Soccer Shots program near you, visit www.soccershots.org.